Learning another language is a good way to challenge your mind, as well as learn about another culture. While I’m by no means fluent in a language other than English (which is something I want to remedy), but I do have the basics of Spanish and German, thanks to classes in high school and college, and time spent in Austria.

I’d like to make the study of another language one of the self-improvement things I do this year, so I’m going to try the following strategies to help me learn a new language: 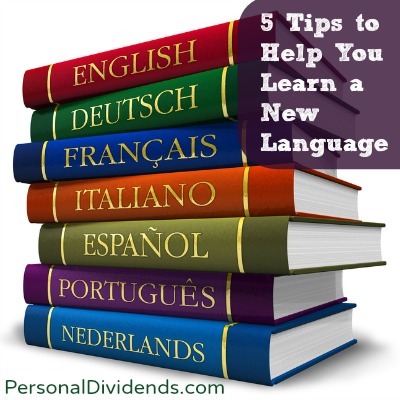 One of the best things you can do to help you learn a new language is to converse in that language. One of the problems I have with Spanish, in spite of the fact that I had four years’ worth of classes in high school and college, is that I never really talked much to people in Spanish.

The advantage I had with German is that I was thrown into situations that involved me speaking German because I lived in Austria for six weeks. By the end of that time, I could carry on very basic conversations without too much trouble.

My goal is to find a language that my son wants to learn, too. That way, I have a buddy. A buddy can encourage you to use the new language more often, and give you someone to keep up with. There are web sites that can connect you with buddies willing to speak with you, and hold you accountable for your progress.

The first thing to do is learn common words and phrases first, since thats going to form the basis of your conversations. Learn these to the point where you understand them without a lot of mental exertion. You might be surprised at how much you can accomplish if you know the most common 100 or 200 words and phrases used in a language.

There are Chinese immersion schools in my locality. The program has been so successful for the kids that there is talk of adding Arabic and other languages that Americans often find difficult.

Try bits of immersion in your own life, even if you aren’t going to be traveling somewhere else anytime soon. You can watch movies in the target language, listen to music in that language, or even read in that language. If you have a buddy in working with you in your home, speak in the language as much as you can.

Part of my problem with German is that, other than taking a few semesters’ worth of classes after returning from my foreign exchange experience, I didn’t keep with it. And I never speak Spanish with anyone because I’m embarrassed about the fact that I’m not very good.

If you don’t practice, or keep at it, you’ll lose it. And intensity matters. Taking a class twice a week for four months isn’t going to do you as much good as practicing every day, and keeping at it for a couple of months. You’ll reach proficiency much sooner if you focus and keep at it.

What do you think? Have you learned another language? What are your tips?

Tweet
Share
Pin
0 Shares
← Should Etiquette Evolve Over Time?
How to Wake Up Earlier in the Morning →