Home › Relationships › 4 Tips for Saying “No” the Right Way

Among the hardest things in life to do is saying no. For many of us, the first instinct is to say yes. We like to help.

However, sometimes it is better for your own health and welfare to say no. There are times when it doesn’t make sense to over-extend yourself.

But how do you say no without causing trouble? In some cases, you might not be able to avoid hard feelings. However, most of those who truly care for you will understand your need to say no.

As you consider how best to say no, here are some ways to address a situation that you don’t want to be involved with: 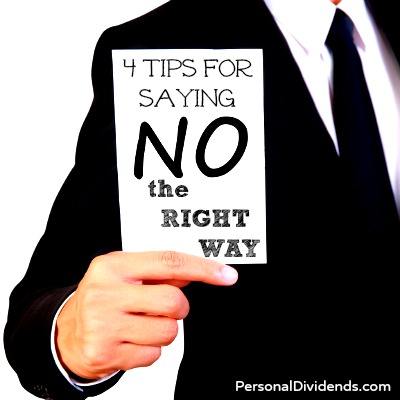 One of the best things you can do is be straightforward about saying no. You don’t have to be rude, but you shouldn’t equivocate. When you say things like “maybe later,” and “some other time,” you are just inviting to be asked again later.

Make sure that you are polite as well as firm. Be sincere in your wishes that you could help, but be firm in your refusal. There’s no need to be rude, or show annoyance. You can show your interest and care for others and show politeness in your refusal. This is the best way to maintain friendships and other relationships.

Even worse if your explanation involves a lie. Honesty is usually the best policy. And if you don’t want to tell a lie, or make excuses, all you have to say is, “I really can’t,” or “I’m sorry, but it’s not something I can do at this time,” or “I’m not comfortable with it.”

Keep it short, simple, and honest, and you won’t have to try to remember different stories or explanations later.

You don’t have to just say no and let that be the end of it. You can also suggest an alternative. If someone wants you to watch a pet, and it’s not something you are comfortable doing, you can recommend a friend who is more interested in animals.

Whether it’s suggesting that you complete a task another time, or whether you offer help in another way, you can turn your “no” into a solution to the problem. That way, you are still providing reasonable help, but you aren’t weighing on your own well being.

You show respect for others, and for yourself, when you are honest about your abilities. Rather than try to do something that you you aren’t prepared to accomplish, and that could have a negative impact on your life, it often makes more sense — and will supply a better outcome — if you learn to say no gracefully.