However, Thanksgiving also tends to mark the beginning of nearly six weeks of eating abandon. It kicks off the holiday eating season, and many of us find ourselves eating rather unhealthily, starting with unhealthy Thanksgiving dishes and not stopping until after we’ve rung in the New year.

Many of us don’t think of Thanksgiving dinner as unhealthy, but some of the foods that we eat at Thanksgiving are really quite bad for you:

It’s just bread and herbs, right? For most of us, though, this just isn’t true. First of all, the bread used in stuffing is usually quite processed, containing a number of ingredients that are generally unhealthy, as most processed foods are. Not only that, but many people use add ins to enhance the stuffing. My husband likes to add sausage to our stuffing. Processed meats, like sausage and bacon, have nitrate and nitrite that can be unhealthy as part of the diet. 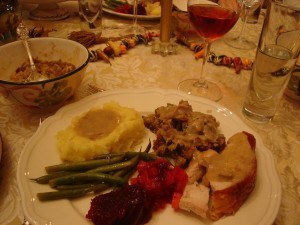 Potatoes on their own aren’t so bad. They are great sources of potassium, and considered an inexpensive food staple. However, it’s not the potatoes on their own that are so very unhealthy (although you do have to watch out for the starchiness). It’s all the stuff that’s added to them. When you make mashed potatoes loaded with butter or margarine, and add processed cheese and other ingredients. Mashed potatoes are suddenly much less healthy, especially one you load them with sour cream and bacon bits.

A regular sweet potato has about 100 calories and is chock full of nutrients. Those nutrients are still there after you mash it up and add it to a casserole, but all the add-ins, as with a regular potato, suddenly make a serving rather unhealthy. Add brown sugar and other sweet, unhealthy ingredients, and top with marshmallows, and suddenly a serving of sweet potato goes from 100 calories to 500 calories.

The obvious answer here is that many of us make gravy with drippings from the meat of the day. So already you’ve got a high fat content. But if you make gravy from a packet, you might also be upping the sodium content of your gravy. A little bit of gravy with your turkey probably isn’t such a bad thing, but with gravy it’s all about the portion control. (Indeed, portion control is huge in avoiding holiday weight gain.)

Unfortunately, many of us douse a good portion of our Thanksgiving meal in gravy, from the turkey to the stuffing to the mashed potatoes. That can quickly offset the nutritional value of your Thanksgiving dinner.

Your chosen beverages can be a very unhealthy part of your Thanksgiving dinner. The sheer number of calories that you might be consuming might surprise you. And when you consider that you are drinking sugary soft drinks (and that includes sparkling cider), that have their own health effects, that can only add to the lack of health in your meal. Alcoholic beverages can cause their own health problems, depending on what you drink — and how much of it you consume.

In the end, these unhealthy foods are a big part of Thanksgiving tradition. Indulging a little probably won’t ruin your health forever, but it does help to be aware. Look for healthier options, and consider portion control. You’ll be healthier — and possibly happier.

Tweet
Share
Pin
0 Shares
← Why Do Americans Get So Riled Up Over Presidential Elections?
Is Thanksgiving Becoming a Lost Holiday? →