Home › Culture and Arts, Lifestyle › Diwali, The Festival of Lights

Not too long ago, my son came home from school and asked me about Diwali. His current best friend is the son of immigrants from India, and they celebrate Diwali. So my son wanted to learn a little bit more about this holiday.

In general, my son enjoys learning about other cultures, and I encourage him in this interest. It’s even more interesting to him, though, when he has a more personal connection with another culture. We took a look at Diwali, and we enjoyed what we learned. 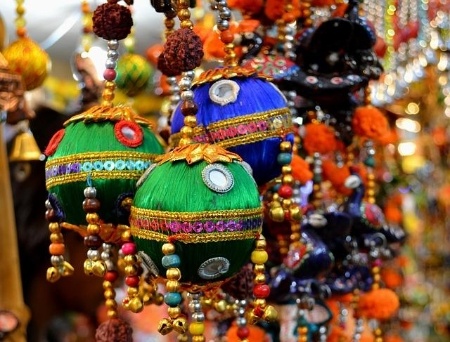 We often think of the “Festival of Lights” as being Hanukkah, and that holiday does involve lights. But Diwali is also very focused on lights, with part of the celebrations involving the lighting of lamps and other lights. Most of the lamps are earthenware, and lined up on parapets, and even set adrift on water.

Generally, Diwali lasts five days, with each day holding a different focus. The third day is the main celebration day — and the day that many of us associate with the entire holiday.

As part of the festivities, the house is cleaned. New clothing is bought to wear, or the best outfits worn. Additionally, beautiful artwork is often put near entryways to welcome guests and invite the goddess of prosperity into the home. The artwork is made with colored flour or flower petals. In the evening, fireworks are quite common. Anything to do with light is a big part of Diwali, as you might imagine.

This is a time of happiness and celebration, and focus on family relationships and other relationships. It’s a time to eat special foods and exchange gifts loved ones. Not only that, but that are also fairs in many towns. In fact, many countries beyond India and countries in Asia now have Diwali fairs and celebrations. There are even celebrations in the United States, including one celebration that Cowboys Stadium that attracted 100,000 people.

Diwali is meant to celebrate the victory of light over darkness. This has many meanings, including the triumph of knowledge over ignorance. There are also themes of good winning over evil during Diwali.

The religious underpinnings of Diwali depend largely on the specific beliefs of the celebrants. Many of us think of Hinduism as as a kind of monolith. However, there are different schools of Hindu philosophy, as well as different local traditions associated with religious observations. As a result, the beliefs and practices surrounding Diwali can vary to some degree.

Additionally, there are other religionists, such as Sikhs and Jains, that have their own observations of Diwali. However, no matter the religious persuasion, Diwali is essentially about light, and that’s something almost anyone can reflect on, even if your religion isn’t Hindu.

Tweet
Share
Pin
0 Shares
← How Does Your Introversion Impact Your Physical Reactions?
Don’t Leave Home Without These Travel Essentials →