Warning: Use of undefined constant ENABLE_CACHE - assumed 'ENABLE_CACHE' (this will throw an Error in a future version of PHP) in /home/tomdrake/public_html/liverichlivewell.com/wp-config.php on line 54
 Ben Affleck as Batman? 5 Actors I’d Rather See in the Role | Live Rich, Live Well

Home › Culture and Arts › Ben Affleck as Batman? 5 Actors I’d Rather See in the Role

I’ve been in love with Batman since I was seven years old. Not Bruce Wayne (although I understand that Bruce Wayne comes as part of the package), but BATMAN.

And, even though I remember enjoying re-runs of the old Batman show starring Adam West, the reality is that I grew up on a Batman who was brooding and complex. And, since I’ve always thought Superman was a gomer, discovering the now-famous (thanks Zach Snyder) The Dark Knight Returns mini-series in junior high was amazing. My Batman is brooding and complex, not campy and happy. 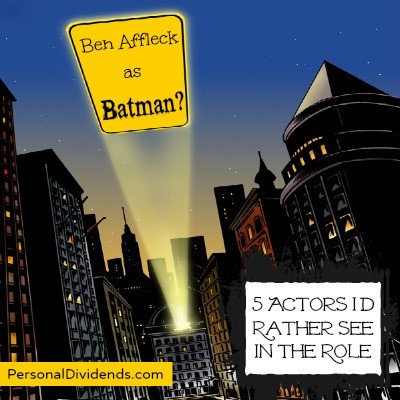 My first reaction to the news was, as expressed by so many others, dismay. WHAT? I’m not a huge fan of Ben Affleck. I don’t think he’s terrible or anything, but I just don’t care for him. And to have him as my favorite comic book hero? Especially playing second-fiddle in a Superman comic book movie? I’m really at a loss.

But who would I rather see in the role? Here are 5 actors I would rather see play Batman on the big screen:

I really like Armitage in North and South, where he plays brooding and complex really well. He’s tough. He’s dark. He brings a certain gravitas to Thorin Oakenshield in The Hobbit. There are so many reasons that he’d make a great Dark Knight. Plus, he could retain just a hint of his accent to give Bruce Wayne’s diction a little extra poshness. Nothing says “money” like a British accent.

There is so much geek backing Urban up. Bourne, Dredd, Lord of the Rings, Star Trek, even Red. He’s got the action hero thing down. He looks troubled by inner-demons in many of his roles. He’d make a great Batman. At least I think so.

Brolin’s got a good face for the Batman mask. He can be very serious. He was even considered one of the frontrunners for the role. But now he’s out. And think that’s too bad, because he would have made a great “nicely aged” Batman who has the right combination of toughness and guile to beat Superman. (And please, oh please, can this next movie let us see Superman experience defeat? Not likely, since it’s his own movie, but a girl can dream.)

He’s pretty enough to be Bruce Wayne, but Butler also has a bit of that roughness to him. Plus, after you see him in 300 doing his thing as King Leonidas, there is no doubt that he can be an awesome super hero. But instead we’ve got Ben Affleck? All I’ll be thinking about is what he did to Daredevil.

Why not stick Magneto in the role? He was plenty brooding in X-Men: First Class, but maybe he was unavailable with a new X-Men movie in the works and the fact that he’s in the upcoming Assassin’s Creed movie. But that chiseled jaw is just about perfect for Batman/Bruce Wayne.

What do you think? Am I off here? Or would you rather see someone else as the Caped Crusader?

Tweet
Share
Pin
0 Shares
← 5 Tips for Helping Your Child Get Ready for Back to School
Healthy Living: It’s More than Just Your Weight →